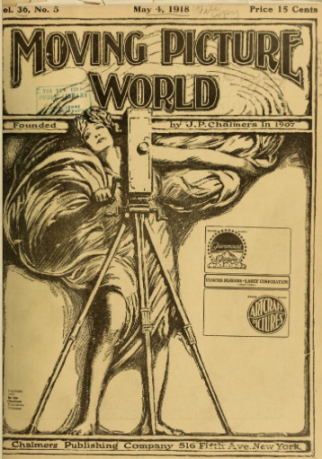 As of this past August, millions of people have access to old media through the pixels of new technology.

The Media History Digital Library and DOMITOR (“the international society for the study of early cinema”) have released a comprehensive digital collection of Moving Picture World, a film industry trade publication that reported on the important developments and releases in the growing movie business.

The years between 1907 and 1919 saw a transition of public media consumption to what we would consider a traditional film medium: the theater. Now that digital editions of the first 12 years of Moving Picture World are available online for free, researchers can begin to piece together a more complete account of what was going on in the film business as movies gained a cultural foothold.

The collection holds 12 years of information that should be incredibly valuable to film scholars, a category of academia that suffers greatly from a lack of primary sources suitable for scholarship. Historians and film critics alike should be excited by this work because it creates a definitive base upon which to rest our modern understanding of film history and how film theory has developed since the turn of the 20th century.

In its comprehensive coverage of everything film, Moving Picture World is almost an early-20th century, more professional Variety magazine. The 70,000 pages released hold film reviews, profiles of actors and directors, details of technological improvements, and ads for films that will allow readers to look back in advertising history.

Blogs and social networks serve many of the functions that Moving Picture World did in its time. However, they also allow people to interact with their media landscape on a greater scale; free blogs allow amateur and professional critics alike to practice their craft, aggregators like Rotten Tomatoes provide a rough gauge of how good a film is, and social networks like Twitter point people towards exciting social developments (like broken box office records, or an actress’ failed marriage).

The full-text search engine that is provided for perusing Moving Picture World will allow for greater interaction with the document. People will be able to pinpoint specific snippets of information that they want to consume and skip over the rest, as opposed to flipping through pages and passively consuming the advertising messages. On the other hand, these advertisements give a glimpse into old marketing, and so could also be valuable to scholars of communications. In a way, the efforts of DOMITOR and the Media History Digital Library have retro-fitted Moving Picture World to create a historical new media source out of an “old media” publication. 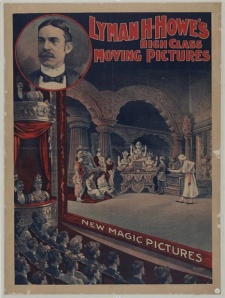 Lyman Howe is perhaps one of the best-kept secrets of Wilkes-Barre, Pennsylvania. He was a roaming showman, a master from “a forgotten era of traveling exhibition” that entertained audiences who had yet to be graced (or cursed, depending on your perspective) with constant technological stimulation and entertainment.

Howe operated in the pre-Hollywood film industry, when the East Coast—and Wilkes-Barre in particular—was a hot spot for the growing movie business. He brought audiences footage of daily life as well as shots of exotic lands. Some of the more exciting films Howe showed people included a demonstration of a United States military submarine on the open ocean in 1915, and a longer, more finished montage of foreign cities strung together by animated segues called The Wandering Toy.

Although most silent films have been lost because of the nature of nitrate film (it has a good chance of spontaneously erupting into flames) or because no one bothered to preserve them, over 100 silent films were found in an archive in New Zealand in 2010. A 1921film by Lyman Howe called “Lyman Howe’s Ride on a Runaway Train” was found within this treasure trove of film culture history. The Library of Congress is currently working to restore this piece which probably hasn’t been seen for decades.

Judging by content alone, modern audiences might not be as interested in Howe’s work. There is a huge gulf separating what was considered entertainment at the beginning of the 20th century and what we consume for entertainment over 100 years later. Changes in how we conceive of film as an art and advances in capturing motion on film and processing it have taken us beyond the grainy “moving pictures” Howe exhibited. In Howe’s time, moving pictures were an exciting development in technology and entertainment. The novelty of seeing a film, no matter how short or mundane, gave audiences enough entertainment to justify shelling out a few cents.

The path visual media has traveled since the days of Lyman Howe is remarkable, and raises questions about where it can go from here. Today’s films can give us more than a new perspective—they can create stories and worlds of which audiences would have never dreamed. But the idea of novelty as entertainment is still applicable to modern film; a good combination of marketing and special effects can still convince an audience to come see a film. Marketing techniques and mediums have evolved to generate hype long before a film is released. And once audiences are in theater seats, special effects keep their eyes glued to the screen and can keep their minds off a lackluster script—I’m looking at you, Transformers. People can even be convinced to see the same movie twice (Finding Nemo, Titanic) thanks to advances in film technology like 3D.

In his own time, Lyman Howe was on the cutting edge of the new media. His marketing and the American public’s fascination with new technology drew them to his exhibitions, much like a popular movie franchise can generate ticket purchases for sequels declining in quality. Even as the American film industry shifted itself to the west coast, Howe’s company continued to process film in Wilkes-Barre. Compared to feature-length films with intricate plots and stunning cinematography, Howe’s exhibits come off as a bit primitive, but his traveling exhibitions laid the groundwork for film to become a significant part of American entertainment culture.